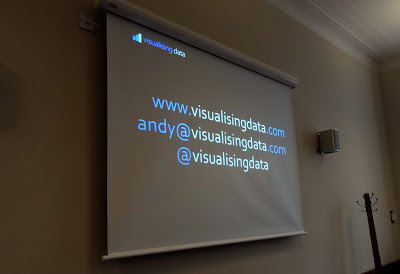 I first became aware of Andy Kirk's visualising data workshops while studying for my MA last year, however pressures on time meant I never got around to attending. Having now earned my degree, found a job and with holidays to take I decided to visit a London event to help fill in some of the gaps in my knowledge. As these events are intended as an introduction to the subject I was conscious that we would be covering a lot of ground which I was already familiar with, however I was also keen to get an opportunity to discuss visualisation with others who have an interest in this field, something I have sorely missed since graduating from uni.

Many of the subjects covered in the early sections were indeed quite familiar to me, in fact it was amassing how closely it overlapped with the themes and examples used in my own >dissertation, including charts from Florence Nightingale and studies into visual perception from Cleveland and McGill. For everyone else in the room who had not read so extensively around this subject this would have been a real eye opener. For me it just confirmed how much reading I managed to cram into last summer.

Hearing Andy speak throughout the day from his own personal experiences while sharing his own thoughts was really interesting, and it is reassuring to know that both him and I appear to think along similar wavelengths. An example of this came up a few times when he mentioned the importance of leaving the reader feel rewarded, providing the reward is greater than the effort needed to decode the information. This is something I have touched on a number of times in my writing, including in the The Billion Pound-O-Gram analysis in my dissertation, and something I constantly strive to achieve in my own work.

Another highlight for me was the group tasks, especially when we were provided with a series of visualisations and were asked to evaluate them based on a number of criteria. Diversity within the groups ensured that on occasions we had to agree to disagree, especially on a visualisation by Krisztina Szucs examining movie Rotten Tomatoes scores, budgets and profitability, a piece I have previously examined >here. By far the most difficult task for me was right at the end when we were provided with a spreadsheet of both quantitative and qualitative data and were asked how we would set about visualising it. Once again a mixture of talents and backgrounds among those participating ensured a range of different and interesting responses.

Whether you are an aspiring data visualiser or have an apatite to grow further I encourage you to attend one of these events when one arrives near you. Failing that everyone should at least take a listen to a series of >podcasts from Enrico Bertini and Moritz Stefaner on which Andy has recently appeared as a guest.

Further information on these courses as well as a list of venues both in the UK and abroad can be found on the Visualising Data website >here.
Posted by Unknown at 16:22 0 comments


I’ve lost count of the number of energy mix charts I’ve seen in the last few weeks, and practically all infuriate me. There have been pie charts in abundance that have succeeded in making the information completely unreadable, and the remaining stacked area and bar diagrams do a pretty good job of obscuring much of what is relevant or interesting. Take this fine chart for example:


The only values we can reliably compare are the total installed capacity and those for nuclear as these are the only two which share a common baseline. Take a moment to study the growth of natural gas (red) in the early part of the chart, as the elevation for each bar is determined by the values below it we are forced to judge each segment individually before making comparisons between it and its neighbours.

I recently came across some energy consumption data for the UK since 1970 and came up with an alternative method of display. The light grey bars are used to show the total energy consumption, and a breakdown of either the fuel type or sector are shown within. Crucially though all elements for comparison are shown along the same baseline which hopefully makes trends easier to follow.


I did consider applying notes to this chart to highlight historical events that may have influenced the data, Thatchers election as prime minister in 1979 or the coal miners strike in 1984 for example. I don’t feel that my role is to provide all the answers though, just the facts in a digestible manner. I hope though that the well informed reader will make these connections themselves and as such will feel rewarded by their intelligence.

To see this and more of my work visit my website by clicking here:
lifeindata.site50.net

Update 1
Comments below make reference to the following images,

Update 2
To read more about this visualisation click >here to visit The Guardian Datablog.