I recently received a tweet of support for my recent Information is Beautiful competition entry from Saakshita Prabhakar. She later asked if I could provide some feedback on the Visual.ly site for the piece she submitted. These were my impressions:

Comparison of pie chart segments can be extremely difficult since it can be challenging to measure angles or arc lengths with our eyes alone, especially when we are required to make comparisons between many diagrams distributed around a page. I like how in this image many of these problems have been eliminated. Firstly each segment begins at the standard 12 o’clock position which instantly makes things much easier as we are not required to use our brains to rotate them ourselves. By highlighting the 10% intervals we are also provided with a series of perceptual anchor points which our eyes make great use of when making quick comparisons between different areas of the page. We are also able to count these bars and accurately decipher the corresponding percentage if that is our intention, a task which would be almost impossible using standard pie charts.

The clean, uncluttered style makes it a joy to read, even the legend at the bottom looks lovely. It would work great as an interactive piece where the reader could expand each section to see which other movies came out in that period.

I wonder if it would have been possible to somehow also show total box office takings as well as a percentage of the total for that year? I say this because it appears on this diagram that Kung Fu Panda 2 did better than Toy Story 3, however this is not the case. Dreamwork's picture only did better in relation to everything else from that particular year.


My preference would have been to arrange the years progressing from left to right since that is how I preattentively expected them to appear, but its really not a big issue and they are labeled clearly enough.


Very nice work, I look forward to seeing what you produce for the next one!
Posted by Unknown at 21:19 0 comments 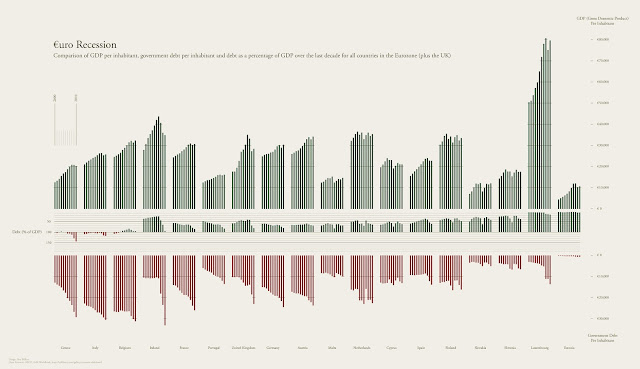 I always enjoy reading the comments from others on my work. Of course its always great to hear the positive, but constructive criticisms are also tremendously helpful. Roman Griesfelder writes on Google+ about my €uro Recession piece:


“I like the classic style.
Still I have a hard time understanding the middle part (Debt % of GDP).


My first thought was:
Why are there positive and negative numbers for the %? Is it possible to have a negative percentage of debt? Certainly not.


My second thought was:
Look closer!


My third thought was:
Can't be true! What I perceived as zero (the point where green becomes red), is not zero. It is 100%.


It means, that numbers smaller than 100 make the columns go up when they decrease. This is hard to understand. For the eye countries like Luxembourg or Estonia (on the far right) have the highest % of debt. But actually they have the smallest.


I think it is not very helpful to show it like this.”


I replied to this post with the following message:

Hi Roman,
Thank you for your thoughts on this, I gave this aspect a great amount of consideration when I designed this visualisation and I selected a method which I feel presents the data in the clearest and most logical manner to someone without any previous knowledge of this issue. I hope I can clarify a little more. The intention of this piece is to highlight the relationship between two factors that have positive and negative effects on each countries economy. The positive effect (GDP) is shown using bars progressing upwards. The negative effect (debt) is shown by bars moving downwards. The colours green and red were also selected because of the connotations they share with growth and contraction. Between the two we see how these factors balance out by showing the amount of debt expressed as a percentage of GDP. If the amount of debt is equal to it’s GPD, debt will be show as 100% of GDP. We can consider this to be the baseline with the economies performing well represented above it, and those in trouble below. Greece has levels of debt almost one and a half times it’s GDP, shown on the chart as nearly 150%. This is not a good situation for Greece! It was really important for me to show this negative situation using the same idea expressed before, that is red bars moving downwards and below the baseline. Countries such as Luxembourg and Estonia who (for very different reasons) have very low levels of debt when expressed as a percentage of GDP, are shown using the green bars growing upwards above the baseline.

As you point out it would normally be expected that a y-axis is labeled with the smallest figures at the bottom, however if this was the case in this example the poorly performing countries would feature bars progressing upwards, which is a contradictory impression to the one which I felt was appropriate. Of course this issue would have been avoided had I chosen to instead show GDP as a percentage of debt, however this would have had a dramatic effect of the scale required since the figures then range between 70% and 2,701%. In a test this produced a highly unbalanced appearance which I believe would not have been a good choice for the purpose of comparison between countries in this case.

When designing any piece of visual communication it is of course vital to consider the general rules and conventions which readers will approach you work with. However as you may be able to tell from my work I enjoy challenging these conventions if I feel there is a more interesting or logical alternative, or if it offers a fresh view of the data that can lead to new levels of understanding.

Many thanks for your thoughts on this and allowing me to share some of my approaches to design.

Update:
Roman has produced an alternative to my version. I reply:

Hi Roman. Its great to see an alternative way of showing this data. I still prefer my version if I'm honest, however I understand your concerns and appreciate that different methods of visualisation work for different audiences. I have found this discussion tremendously useful and hope that both our practices will benefit as a result.

All the best,
Ben 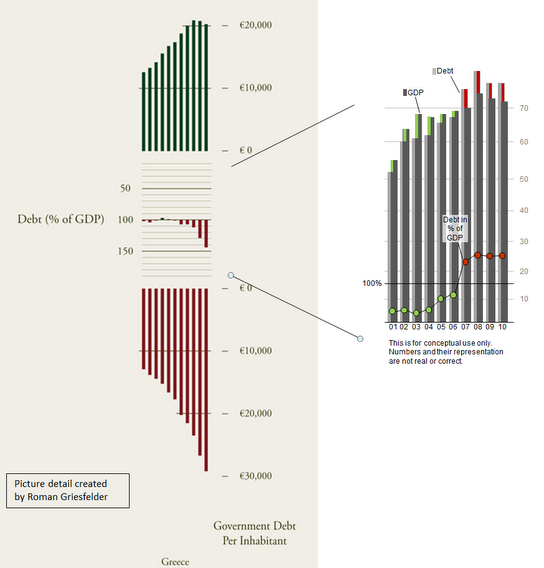 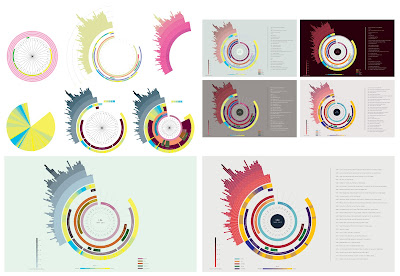 At this point nine months ago myself and five others were franticly putting the finishing touches to the work we were each submitting for our MA Design Major Project. I had almost everything prepared for the Monday hand in by the Thursday before, there was just one more thing I desperately needed to do. Its funny (and somewhat scary) to think that my Life chart, the piece that has received the most positive feedback of all my work very nearly didn't happen at all. I had it planned out weeks before in my sketchbook, however I only began the process of building it in Illustrator with four days to go. Thankfully I encountered few problems in its construction and it closely resembles how I imagined it would from the drawings. However it took especially long, all Saturday afternoon and evening in fact to get to a stage where I was happy with the colours. As I experimented with various pallets (while watching Breakfast at Tiffany's in the background) I suddenly noticed the resemblance to an eye when a dark circle was placed in the centre.

At the time of writing this the chart has been viewed 1,105 times on Flickr, and undoubtedly many more times across other websites including my own. I have received two emails this month alone from people contacting me for the first time asking about it. It was the first piece of work that I sold at the MA design show, and you know you are doing something right when Nicholas Felton includes it in his personal blog.

This piece didn't feature in my MA Design log books as it ran too close to the deadline, however much of the other work I produced is documented and available to view in detail on my website. (click here)

For two years now I have been asked continuously by friends and tutors if I blog. Back then I don't think I could have imagined anything worse. No one would be interested in my random thoughts I thought, and besides, writing anything at all is an ordeal for me as I constantly rewrite and restructure anything I have just typed. (I'm doing it now). Even texting a friend takes me far longer than it needs to.

At this point last year I was just beginning the major project phase of my MA in Graphic Communication and was rapidly collecting data on myself that I could turn into data visualisations. I've always been a private person, and then all of a sudden through my work I was revealing all kinds of habits and interests. Others on the course were enthusiastic about my work and so I decided to share them online.

In July 2011 things went a bit crazy, views of my work on Flickr jumped overnight and I was receiving messages of support and questions about my methods from all over the world. (If you were one that got in contact then thank you very much). I later discovered that one of the most well known information designers Nicholas Felton had blogged my work.

Since then I began to use Twitter and through here I discovered the Information is Beautiful competitions. In fact my entry won first prize and earned me $2,000. The publicity generated yet more interest in my work which lead to me producing a visualisation for Qatar based news group Al Jazeera. In short I believe the internet is a truly amazing thing and I intend to make the most of it.

I am currently looking at improving my website to include my more recent work and I'm also looking at adding a section that explains my general design process and tools since I have had so many people asking about this through email. This blog will provide further reading as new projects and challenges come my way, and I also hope to share and discuss some of the work from others which I find most interesting or relevant.

I have already revealed a lot about myself, but there will be much more to come. Attached is an image of my favorite place to work.

Thanks for reading and I hope this proves interesting. 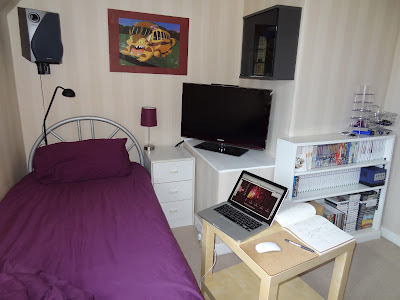